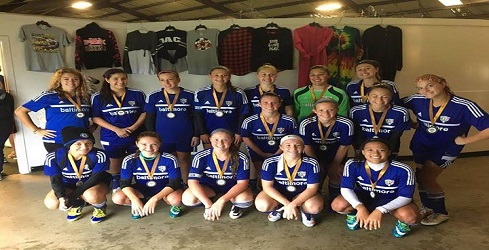 Bays Pride win the Kirkwood Premier Frederick Cup for the second consecutive year! The Bays Pride U17 girls squad finished the Kirkwood Frederick Cup undefeated with a 2-0-1 record.  The girls played up in the Under 18 division and tied Henelopen Surf (DE) 2-2, while defeating the Franklin Square Raiders (NYE) 4-0 and 1-0 to clinch the championship.

Overall a great win by the team, playing in some very wet conditions.